TOOLS OF THE TRADE: AT LOGGERHEADS WITH THE TODDY


The toddy stick. The loggerhead. The swizzle stick. These three very useful tools employed by early mixers nearly disappeared from behind bars in modern times. However they disappeared for three entirely different reasons. The swizzle stick was replaced by the blender, the bar spoon, and the shaker. The loggerhead was a fire hazard. So it went out because of health and safety regulations. And the toddy stick? It disappeared in name only. Today we call it a muddler.

A 19th century book on the history of a small Massachusetts town contained this excellent description of a loggerhead:

“Now this loggerhead, or Flip-Dog, as it was sometimes called, consisted of a piece of iron about two feet long, one end being quite thick, while the other dwindled down to a handle; such an article being a main spoke in the furniture of every such place in those days. It was used in making flip, which was a mixture of beer, spirit and sugar, into which the loggerhead, hot from the fire, was thrust, heating the compound and causing a froth on top which usually ran over the sides of the mug.”

The loggerhead was also very useful for melting tar: a less than desirable additive to the next rum flip! This tool was also used for an assortment of other tavern keeper activities such as cauterizing wounds and even igniting cannons.

The advantage of heating a drink with a loggerhead—also called a “flip dog”—is that the drink would be heated instantly. Think of it as a predecessor to the microwave.

The loggerhead was such a common, convenient device that its name gave birth to a number of other British terms. A loggerhead was a person of low intelligence: Someone who might as well have a lump of iron rising above their neck. The British expression “at loggerheads” meant reaching an impasse in a dispute. It later took on the more heated meaning of arguing to the point of physical violence.

Among the drinks most commonly heated with a loggerhead were punch, toddy and flip. In those days before central heating, tavern keepers served a lot of hot drinks.
A 1796 British dictionary defines the term “swizzle” as a “drink, or any brisk or windy liquor. In North America, a mixture of spruce beer, rum, and sugar, was so called.” But the swizzle itself was Caribbean, not American. The quararibea turbinata or swizzlestick tree grows almost exclusively on the southern islands of Antigua, Barbados, Dominica, Grenada, Trinidad, and Martinique. The three to five branches that form the head are not roots but actual branches of the shrub that grow naturally from the main stalk.
In the Caribbean, swizzle sticks are not reserved for making swizzles. They are used as hand blenders in soups, creams, and many other mixing tasks.

Unfortunately, swizzle sticks are not a large export commodity. So with the exception of a very few sources, the easiest way to get one—or more, since they are hard to come by—is to travel to the Caribbean or ask someone who is heading to the islands.
If you can’t get your hands on a genuine swizzle stick, there is a traditional alternative: the eggnog stick.

To make one: Split the end of a 25 to 30 cm balsawood stick. Insert a cross piece of wood approximately 6 cm by 1 cm by a few millimetres thick. This works almost as well as the swizzle and was a very common alternative that was produced in northern climates.
Both the swizzle stick and eggnog stick are used by placing it in the glass. Then holding the shaft between the palms of your hands, move your hands back and forth to whirl the stick in the glass. Today, a skilled bartender swizzling a drink or whipping an eggnog creates a timeless theatre of drink production with the inviting sight and sound of the whirling stick.

Isn’t it a shame that the same term is used for the frequently-branded, plastic stirring stick? No one precisely when this stirring device was invented. But we do know that Cartier introduced a line of personalised, silver-plated swizzle sticks, in the 1920s, that was promoted to eliminate the bubbles in a glass of champagne! Noél Coward, George Gershwin, and other posh swells of the day all toted their on silver sticks around to cocktail parties and hotel bars.

The toddy stick was also immortalized in drinking lore. One writer from ages part described the humble toddy stick as beloved for “the welcome ringing music it made on the sides of glass tumblers...” It was also excellent for crushing sugar in the bottom of a glass or mug. More than one bartender also used it to defend himself when accosted by a belligerent drunk. Sounds like a muddler, doesn’t it?

According to one early description, the toddy stick was six or eight inches long with a knob at one end or flattened out at one end. It was shorter than modern muddlers. But remember the dimensions of the doppelfassbecher. The glasses were smaller and so were the drinks.

Mixing glasses and mixing sticks, in hand, how do we pour the sumptuous contents we have made into a serving glass? That’s the subject of our next story.

[This article was originally published in German in 2010 in Mixology Magazine.] 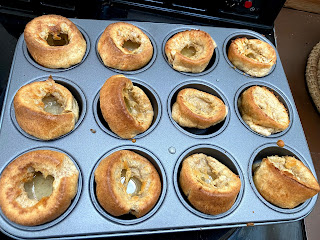 With a Twist or How to Make a Sunday Roast Favourite with Wholemeal Flour It's getting harder and harder to find plain flour in the markets these days now that everyone has got the homemaking bug out of necessity. (The sell by date on commercial loaves kind makes them a counter-intuitive purchase in today's climate.) But we decided that we'd make a beef roast tonight that will translate into three more meals into the week. And no self-respecting Brit would feign to eat a Sunday roast without Yorkshire puds. Actually these lovely nests for gravy are also ideal for serving up curry if you run out of rice. They make great boats on which to float a stew or sautéed mushrooms. In short, Yorkshire puddings are great to eat on any and every occasion you can imagine. This version uses wholemeal flour because we ran out of plain flour and not likely to get any for another month at the rate things are going. Still didn't stop us. 100 gr (3.5 dry oz.) wholemeal flour (

by Anistatia Miller and Jared Brown Kümmel. Few liqueurs from the early cocktail repertoire have so much confusion surrounding their names. Some say that it is a cumin liqueur. Some say that is a caraway liqueur. The Netherlands, Russia, and Germany have all claimed to make the finest. What’s the truth behind this herbal liquid with the German name?  There has always been confusion surrounding cumin and caraway. Both are herbaceous annual plants whose seeds bear more than a close resemblance. In more than one country the names for these botanicals are frighteningly similar. In Scandinavia, caraway is called kummin, while cumin is called spiskummin. In Romania, chimen (caraway) and chimion (cumin). Even in German, kümmel (caraway) and Kreuzkümmel (cumin) walk hand in hand. Cumin plays a large role in Asian and Mexican cuisines because of its strong aroma and flavour. It’s also used in the Netherlands to produce Leidse and Frisian clove cheeses. Caraway, on the other hand