From Ground to Glass

by Anistatia Miller and Jared Brown

I used hate the last grey bits of winter. I used to believed that the summer was lazy and hazy just like the song said. My body clock thought 5 am was bedtime not wake up time. I used to have gloriously long, varnished nails. And then it happened. Jared and I became smallholders.

It all started, back in 2001, when we took a country cottage situated forty miles from Oxford for Christmas week. It was standard Cotswold fare: cozy bed, Cotswold stone walls and floors, roaring fireplace, lovely pub two miles away with its own skittle alley and marvellous local ales on tap. To us, it was heaven incarnate. We lived in Manhattan back then. It took until 2010—a whole decade—for us to finally realise our addiction and our need to feed it.

Addiction? Yes, you have to call it that. It was an addiction to fresh-from-the-chicken eggs, perfect for making Eggs Benedict and Egg Sours. It was the eye-rolling richness of fresh-from-the-hedgerow raspberries puréed into sauce for grilled meats and gently transformed with vinegar into the perfect shrub for champagne cocktails. We had become addicted to “fresh-from” anything that was grown in good country soil.

When we moved into this eighteen-century cottage with its long-abandoned kitchen garden, we were ready for the challenge. The first month was part archaeological dig of Victorian china teacups, rusted farm implements, and an astounding array of clay pipes mixed with part geological study on how to turn hard clay deposits and former burn sites into rich, fertile growing compost.

Out came the graph paper and notebooks. Long searches through seed catalogues in front of a winter fire and rolling newspaper growing pots for seeds whilst it rained and sleeted outside were broke by trips to purchase essential tools. We discovered that working a ton of manure and topsoil into hand-built raised beds is better than three hours doing weight at the gym. Those lazy, hazy summer days are punctuated with contemplative weeding, slug hunting, and toting gallons of water pumped from our water barrel that was a former whisky cask. 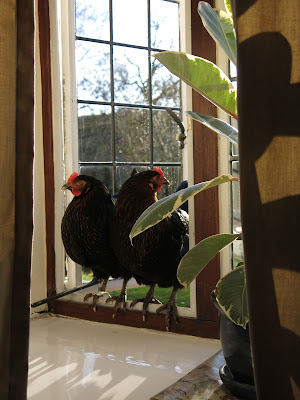 There are staples in what is now our seventh growing season  Borage for garnishing summer cups with its cucumber-y splendour has become a welcome “weed” that re-propagates itself year after year. Wormwood shrubs tower two-metres tall, providing a fresh infusion for Gin & Wormwood cocktails during the summer and dried for inclusion in homemade vermouth in the autumn. Corsican mint serves as ground cover before it is snipped as garnish for Grasshoppers and distilled for homemade crème de menthe.

Three nurtured blackcurrant bushes yield over fourteen kilos of fruit each year: perfect for fermenting into a rich wine and processing into crème de cassis. Assorted wild and cultivated strawberries, gooseberries, and two varieties of raspberries keep us occupied within the confines of our garden. Behind the house rises a hill of hedgerows that offers even more temptation: blackberries, bullace plums, elderflowers, hawthorns, the list is endless.

The Supremes—our three Black Star chickens—joined us two years ago. They yield huge, golden-yellow-yoked eggs that serve as the core for Egg Nogs, Flips, and those Egg Sours I mentioned earlier. They also do double-duty as crop protectors who snap up invader snails as a special treat.

Granted, we do grow peas and garlic. But why waste precious garden space on growing potatoes which are far cheaper in the shops and lettuce that only ends up feeding the local rabbit population? We prefer raise hard-to-find plants that serves a dual purpose: one for the plate and one for the glass.

Will we ever tire of getting sweaty, dirty, achy, and bruised from all this year-round activity? Only if we ever get tired of the taste and overwhelming feeling of accomplishment that happens when you sip a glass of something that travelled that amazing road from ground to glass.

Posted by mixellany at 13:31 No comments:

We’ve never recommended a playlist for an article. But before you read this you might want to queue up the following tracks (five of these should do it): "Brick House", "Flashlight", "Bad Girls", "Xanadu", "Dancing Queen", "The Hustle", "Jungle Boogie", "Good Times", and "Rock with You".

The 1960s were trumpeted as the dawn of the sexual revolution. This was supposedly the era of free love—the near abandonment of western culture’s puritanical morals. It started then. However, the seeds planted in the 1960s did not bear fruit until the next decade. The 1970s—and by “1970s” we mean roughly 1975-1985—was the age of debauchery. Bars were the epicentre. The drinks reflected it. What could be more decadent than sweet shooters, strong cocktails with barely perceptible alcohol, and long drinks with tropical pretensions.

Discos quickly took over where rock ’n' roll clubs had been. The Beatles were replaced by the Bee Gees, Donna Summer, and Rick James. Even the Rolling Stones, the Grateful Dead and David Bowie eventually capitulated. Each released an album set to a disco beat. Why not? The parties were non-stop and the the club dress code was literally as bare as you dare.

These were drinks designed as a prelude to sex. There were no subtleties. Sex on the Beach, Slippery Nipple, Sloe Comfortable Screw Against the Wall, Screaming Orgasm. It was a long list. Who can forget Rupert Holmes’ song "Escape" (the Piña Colada song) which topped the 1978 and 1979 Billboard charts. Then there were the shooters: the B52, the Woo Woo, the tequila body shot.

Those sugary, fruity, mostly vodka drinks were not without merit. Just as the 1960s set the stage for the 1970s, the 1970s drinks contain the foundations for some outstanding modern drinks—balanced flavours that don’t take themselves too seriously. We make the Harvey Wallbanger with good vodka, fresh squeezed orange juice and high quality ice. It's an excellent drink. Apply the same approach to any of the popular drinks of the 70s and the results are remarkable. Let’s face it, while a Hanky Panky has a suggestive name there will never be anything else inherently sexy about the drink. Even our own variation—the Spanky Panky, with mint in the shaker, a hard shake, double strain and a spanked mint garnish—doesn’t leave you wanting to get physical. It just leaves you thinking it would be a good idea to have another.

Today’s bitter-balanced and overly-citrus concoctions pack a lot of flavour. They don’t pack a lot of decadence. Perhaps this is because the new sexual revolution is on people’s phones instead of resident in the bars. No one needs to pass a doorman’s scrutiny. No one needs to look particularly alluring in a bar. It’s just a matter of getting swiped right or left these days, circumventing the social aspect of sex.

As social director of a fraternity (perhaps the most important responsibility I took on at university), I fondly recall a line of ten blenders cranking out frozen strawberry daiquiris for the crowd. Yes, we found that a mix of fresh and frozen strawberries gave us the best results. No, we didn’t know the difference between rums at the time and the drinks could have been much better. But far more important to the success of every evening, we were most concerned about the party and the guests. Those parties could not have possibly been better. Drinks may be great, but unless there’s a bit of decadence involved, they can never be the best.

Posted by mixellany at 13:26 No comments: